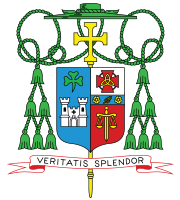 The long-awaited decision in the case of Dobbs v Jackson Women’s Health Organization has been announced today by the U.S. Supreme Court. This decision overturns the 1973 Roe v. Wade decision and effectively closes a shameful period in American history that witnessed the evil and legalized killing of 60 million unborn babies throughout the United States of America.

While the Catholic Church in the United States, the faithful of the Diocese of Fort Worth, other men and women of good will, and I have prayed and worked diligently for…

the nation in response to the leaked decision from the Supreme Court regarding Roe v. Wade. This type of activity is an attempt to threaten the rightful and peaceful assembly of Christians to worship and disrupt the sanctity of the holy sacrifice of the Mass.

These groups are calling for people to dress in costume, carry signs and record their protests while attempting to enter churches in order to cause disruption and provocation. All of us must remain peaceful, prayerful, and recollected. Each and all of us should be more intentionally aware of our surroundings…

“Our current environment is one with two important factors: 1) the ready availability of vaccines which in most cases limit symptoms, and 2) treatment protocols and medicines now exist that minimize likelihood of hospitalization. Thus, beginning this weekend, the wearing of face masks during Mass and at the distribution of Communion is now optional and left to the discretion of the ordinary or extraordinary ministers of Holy Communion.”

Please ask your parishioners to pray for peace, an end to war, and for the safety of all people of Ukraine who have been traumatized by the unjust Russian invasion of their homeland.

The Holy Father, Pope Francis, has asked that “believers in a special way devote themselves intensely to prayer and fasting for peace in Ukraine” on this Ash Wednesday. Since Ash Wednesday is a day of prayer, fasting and abstinence, I ask that all Catholics in the Diocese of Fort Worth follow the Holy Father’s admonition and apply these penitential actions for the intentions of peace in Ukraine. …

“During the past several months I have received questions from members of the Catholic faithful in the Diocese of Fort Worth both directly and indirectly as communicated to me through our priests, deacons, and school administrators regarding other issues of morality around the vaccine for COVID-19 and the possibility of offering religious exemptions to mandates issued by employers and government offices at the federal, state, and local levels. I have very seriously taken these matters to prayer and to consultation with other bishops, theologians, administrators, medical experts, and my priests and legal counsel.” (Pastoral Letter 9-28-21)

Bishop Olson’s Pastoral Letter Regarding Alteration of Protocols, Guidelines, and Other Liturgical Celebrations

Today in Austin, Govenor Greg Abbott announced that the Centers of Disease Control and Prevention (CDC) has made an initial allotment of over 1.4 million doses of the COVID-19 vaccines to the State of Texas for the month of December.  The vaccines, which should start to arrive in the Texas the week of December 14, will be distributed to qualifying providers across the state who will administer these immunizations. …

“The Church reproves, as foreign to the mind of Christ, any discrimination against men and women or harassment of them because of their race, color, condition of life, or religion.” These words, written at the Second Vatican Council in the Declaration entitled Nostra Aetate, articulate concisely the teaching of the Church against the sin of racism in conformity with the heart and mind of Jesus Christ. It is the heart and mind of Christ that must always be at the forefront of our discernment and consideration of all matters involving the morality of our relationships with other human beings and the laws and structures that safeguard and govern these relationships. Faith and right reason anchor our discernment in the light of the Truth that proclaims our dignity as human beings created in the image and likeness of God. …